For this blog, I wanted to start studying the Korean language again even though, I still have a problem with how to pronounce the words. But let’s try.

The book that I will be using as a reference for learning the Korean language is Essential Korean Grammar, written by Laura Kingdon. I don’t know which books will help me learn the language, but Kingdon’s book is easier to understand.

The Pronoun is 대명사, read as Daemyeongsa. Pronoun varies depending on the person you’re talking to. For example, instead of using 당신 (Dangshin) to mean You in English, it is better to refer to someone in the third person, like 선생님 (Seonsaengnim) meaning teacher. Though 당신 (Dangshin) is the polite way of saying You, it’s often never used when addressing someone.

* I spelled 이것, 그것, and 저것 into their equivalent Korean alphabet. Though, it is read as ‘igeot’, ‘geugeot’, and ‘jeogeot’. I still don’t know the rules (if there are any) on how to correctly speak the words, that’s why I am reading it the way it is spelled using the Korean alphabet.

I think I’ll stop for now because I need to digest what I have studied. As of now, I cannot understand how contraction works for pronouns, like 는 (neun), 이/가 (i/ga), 을/를 (eul/reul), 의 (ui), and so on.

I’ll see you again in the next lesson. 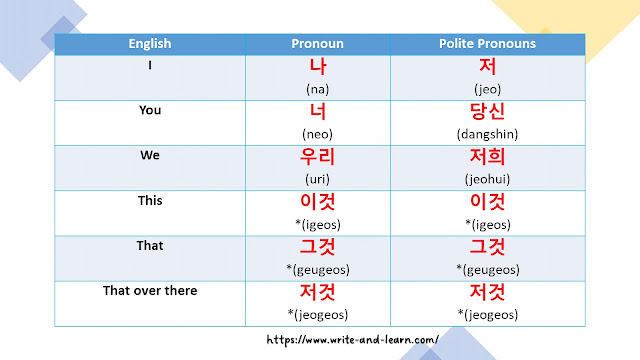