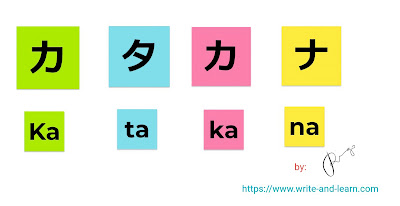 è Katakana is the second writing system of the Japanese language. It is used for foreign loan words called ‘Gairago’. ‘Gairago’ are mostly English words that were written in Katakana like ハンバーガー (Hamburger) or テーブル (Table).

How many characters does Katakana have?

Is it necessary to study Katakana?

è Yes, it is necessary to study Katakana. As I’ve said in my post about Hiragana, it is better to study Japanese using its writing system rather than using Romaji. As a foreigner studying the Japanese language, I have improved my reading and writing skills by using Hiragana and Katakana. Kanji is a different level which we need to give a lot of time and effort to learn.

è I always have a problem using Katakana when translating some loan words and spelled it in Katakana form because I need to spell the Katakana in the way a Japanese pronounce it as the spelling for loan words depends on how it will be pronounced. There is also the hyphen and the small characters which I still have difficulty learning. I don’t have a problem with reading the Katakana characters for loan words, just the spelling.

Here are the 46 Katakana characters: 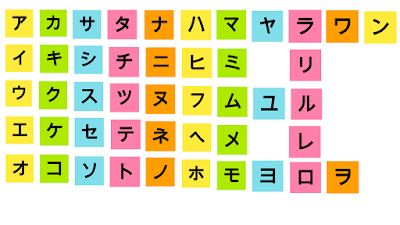 Notes:
1. If you want to translate some English words using Katakana, read it per syllables as each characters correspond to one syllable.
2. Also, there is no 'L' sound in Japanese. The 'L' is read as the 'R' characters. Example is Milk. When you read Milk per syllables, it will be Mi-L-K which is translated to as Mi-Ru-Ku. You will notice that the K is read as Ku because there is no single K character in the Japanese readings.
3. There are Katakana characters that looks the same. Please be careful. That's why it is better to keep on studying it until you can read and write the characters without reference.
4. Also, there are Katakana characters that looks exactly the same as Kanji. These are 'e', 'ka', 'ta', 'ni', 'mi' and 'ro'. We will learn the Kanji in the next lessons.
You can download a practice sheet where you can trace the Katakana letters here:
The Katakana Characters
You can watch it on my YouTube account on how to write the Hiragana letters:
How to write the Katakana Characters
Hope to see you soon.

I will update it as soon as possible.
Thanks.