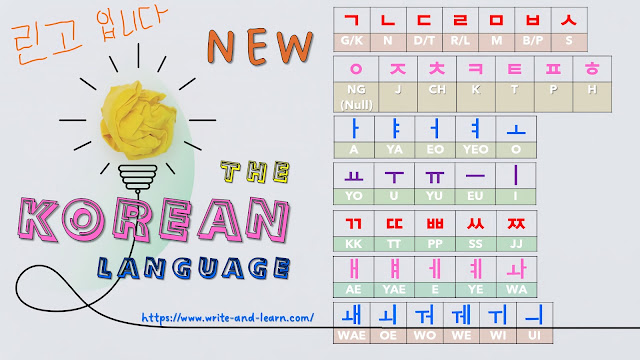 Korean letters can easily be memorized and remembered. The letters consist of horizontal lines, vertical and circles. Hangeul (한국) or Hangul or Korean language has 24 letters consisting of 14 consonants and 10 vowel letters.


Don’t ask me to pronounce complex consonants because that was my problem when I started studying the language. I've watched a lot of videos on YouTube about how to read it, but I still forget and still cannot read it properly. If you ask me to write it, I can write the Hangeul.

This was my problem when I first started learning it but as some teachers said that to learn the language, listen to the native speakers. It will be confusing at first, but eventually, reading it will be no problem anymore.


I also have a YouTube video on how I write the Korean Language. You can check it below:

How to write the Korean Letters


That’s all for now.

Japanese Pronouns   What is Pronoun? According to Thesaurus.com, Pronoun is a pronoun used to refer to a speaker or the people/things that a speaker is referring to. It replaces a noun in a sentence. There are seven types of pronouns namely: the personal pronoun, the demonstrative pronoun, the interrogative pronoun, the relative pronoun, the indefinite pronoun, the reflexive pronoun, and the intensive pronoun. But today, I will only talk about personal pronouns.   In Japan, pronouns can be omitted in a sentence if both speaker and the person the speaker is referring to know the context of the sentence. Also, pronouns give importance to hierarchy, like respect for elders, seniority, or social order. It denotes the characteristics of the speaker or the person talking to like age, gender, and their relationships.   Pronoun in Japanese is だ い め い し （代名詞） read as Da i me i shi . Our focus for today’s blog is: I You  He  She We  They Personal Pronoun I Watas