For me as a foreigner studying the Japanese language, particles are the most confusing part of a sentence structure. I will only explain what I’ve understood during the years that I’ve been studying the language and based on what my Japanese bosses and colleagues taught me about it.

So let’s begin with the easiest Japanese particle, は, read as ‘wa’. Don’t get confused with the correct pronunciation of は. If it is used as a particle in a sentence, the sound is ‘wa’. Otherwise, it is read as ‘ha’.

The particle は is the most common particle. It is known as the topic marker of a sentence. The Noun before は means it is the topic that the speaker wants to talk about.

The sentence structure for particle は is:
[A] は [B] です。

Where the Japanese Copulaです (desu) is the linking verb, meaning ‘to be’ or the Be-verbs ‘is, am, are, etc’. When added to the sentence, the sentence becomes the polite form. The plain form of です is だ. It is also the verb used to describe that A is equal to B.

これ (kore) is the subject in this sentence because of the particle は. これmeans ‘This’ in English.
です is added at the end of the sentence, meaning that これis equal to ペン (meaning Pen).

If we translate the sentence above, it will become ‘This pen is’.

Correct Translation is ‘This is Pen’. 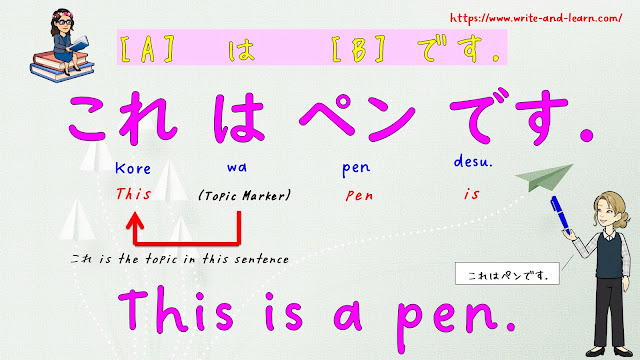 わたし (Watashi) is the pronoun ‘I’ and it is the subject in this sentence because of the particle は.
がくせい (gakusei) means ‘student’.
です is the copula verb ‘am’.

I am a student. 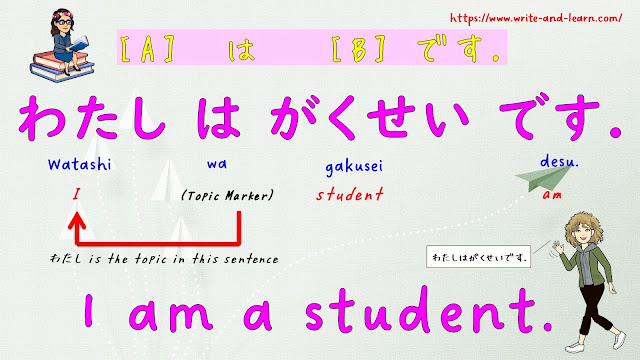 さん (san) is an honorific and the English equivalent is either Mr. or Ms. (Mrs., Sir, Ma’am). In this sentence, we’ll translate it as Ms. So, アンナさん is Ms. Anna and she is the subject in the sentence.
せんせい (sensei) means ‘Teacher’.

Ms. Anna is a teacher. 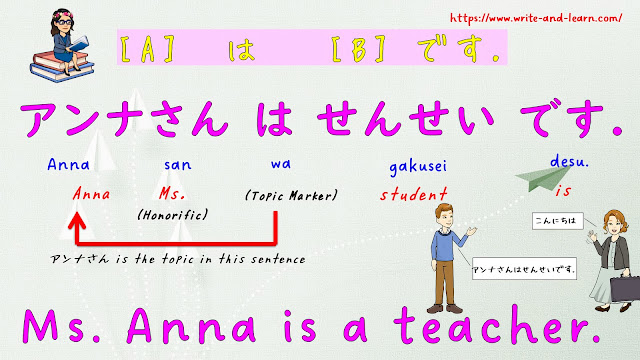 Can be shortened to ペンです if both the speaker and listener already understand what they are referring to.

When the topic is omitted, it will become:

If you want to check my previous post, you can check it through the link below:
>> Japanese House

For my Spanish lessons that I am still not fluent and need more effort to study, you can check the link below:
>> 【SPANISH LESSON #5】Numbers

You can also my personal website where I write stories and blog about things I like:
>> Write and Sleep

Japanese Pronouns   What is Pronoun? According to Thesaurus.com, Pronoun is a pronoun used to refer to a speaker or the people/things that a speaker is referring to. It replaces a noun in a sentence. There are seven types of pronouns namely: the personal pronoun, the demonstrative pronoun, the interrogative pronoun, the relative pronoun, the indefinite pronoun, the reflexive pronoun, and the intensive pronoun. But today, I will only talk about personal pronouns.   In Japan, pronouns can be omitted in a sentence if both speaker and the person the speaker is referring to know the context of the sentence. Also, pronouns give importance to hierarchy, like respect for elders, seniority, or social order. It denotes the characteristics of the speaker or the person talking to like age, gender, and their relationships.   Pronoun in Japanese is だ い め い し （代名詞） read as Da i me i shi . Our focus for today’s blog is: I You  He  She We  They Personal Pronoun I Watas