In Japan, pronouns can be omitted in a sentence if both speaker and the person the speaker is referring to know the context of the sentence. Also, pronouns give importance to hierarchy, like respect for elders, seniority, or social order. It denotes the characteristics of the speaker or the person talking to like age, gender, and their relationships.

Our focus for today’s blog is:

I
You
He
She
We
They

è  This is the most used Japanese pronoun for ‘I’. It is both formal and informal. Formal when a male uses わたし in a sentence but a casual usage for women.

è  It is both very formal and polite personal pronouns. Mostly used on official or business occasions. If you want to be polite, instead of using わたし, you can use わたくし. わたし and わたくし have the same Kanji.

è  these pronouns are mostly used by elderly people. For younger ones, this is very formal.

è It is an altered word from わたし. It is an informal personal pronoun used by the younger generation mostly young females. Do not use this word when talking to anyone other than your friends. It is even rude to use this when talking to one of your older family members.

è Used mostly by Males. It is an informal word of わたしfor males.  It gives an impression of being modest when a male uses it. If you are female, do not use this word.

è This is used by Males only, usually in an informal setting. But do not use this word when talking to someone older than you or a person in a higher position. It will be interpreted as rudeness.

è This is the equivalent of You in English. あなた is sometimes omitted in a sentence, and the person’s name is replaced followed by the honorific suffix. It can be misinterpreted as being rude when it is used by addressing someone older or person in a higher position.

è It can also be translated to ‘Darling’ or ‘dear’ when the wife of a Japanese call him or a woman having or wanting an intimate relationship with a Japanese man.

è A short version of あなた. An impolite or informal way of saying You. It can only use among close friends.

è Can only use in an informal setting mostly to call subordinates or friends.  It is inappropriate when addressing senior people or strangers. The Kanji of きみ is the same as the honorific suffix when addressing a male’s name.

è Only used by males. It can be misinterpreted as rudeness when someone uses this word. Sometimes, husband calls their wives おまえ, a counterpart of あなた by the wives.

Χ  Preferably, avoid using the pronouns below for the word ‘You’.

è When these words are used, it expresses hostility toward another person. きさま used to be a formal word but now, it is very rude to use. In anime, we can always hear these words.

è Japanese pronoun for male (He). It can also be translated as a boyfriend (special male friend) in an informal setting.

è Japanese pronoun for female (She). It can also be translated as a girlfriend (special female friend) in an informal setting.

When using the plural forms of each pronoun, we need to add the suffix for each pronoun. I will only use formal/informal pronouns.

To turn a personal pronoun to its plural form, use the suffix ～たち (～達). This suffix is the most common plural suffix. It can be added to any nouns that refer to people and animals. The other plural suffixes are ～がた and ～ら.

è The plural form We. It can be used formally or in neutral.

è Plural form of ‘we’ used by males only.

è Plural form of ‘They’ of male groups.

è Plural form of ‘They’ of female groups.

Where are you from? (Where do you come from)

è Let’s change あなた to a person’s name. We’ll use the name ‘Anna’.

Ø  アナさんの出身はどこですか？
(Anna-san no shusshin ha doko desu ka?)
Ms. Anna, where do you come from?

Ø  彼は私の恋人です。
(Kare ha watashi no koibito desu.)
He is my lover.

And I'll see you soon!


If you want to check my previous post, you can check it through the link below:


For Hiragana and Katakana page, please check the link below:


For my Spanish lessons that I am still not fluent and need more effort to study, you can check the link below: 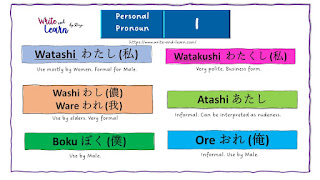 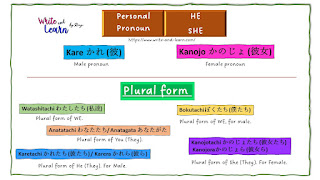 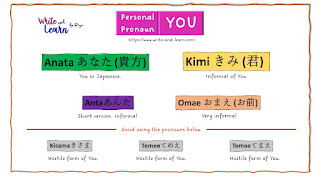