Nationality and Language in Japanese

Last time, I posted about the Katakana of Asian countries except for Japan, China, Taiwan, North, and South Korea because these countries are written in Kanji. For North and South Korea, I will only use one Japanese translation for the two countries.

For this post, I will include these five countries. Of course, I will be using Hiragana and Katakana. Kanji will be discussed soon.

When we talk about Nationality, we refer to it based on the person’s country of origin. In Japan, there is a suffix included to refer to the person’s nationality. The same as determining the language of each country.

じん (jin) – means person. This suffix has the same Kanji as ひと (hito) as both words mean Person. じん is used as a suffix for Nationality.

がいじん – means Foreigner. Both have the same meaning. がいじん is like a slang word in calling a Foreigner.

ご (go) – suffix that is used for denoting one’s language.

When writing the language of a country: Language + ご

Once you know the Japanese of each country. Nationality and Language will be easier to memorize. 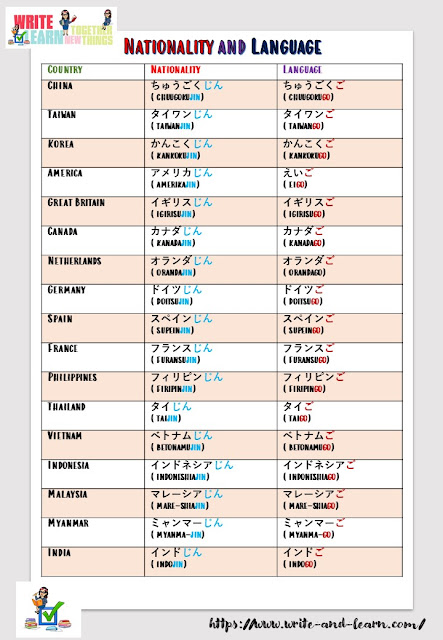 If you want to learn my previous post, you can check it through the link below:
>> Days, Weeks, Months of the Year